Bush Discloses His Opinions Regarding The Immigrant Business Issue

The words for an immigration reform policy are under discussion. In such situation, former American President George W. Bush emerges supporting the cause of the immigrants.

Bush Institute has been working on the matter of reforms. It has been doing so for quite a long time now. As a significant factor in economic growth of the country, the institute identified the influence of the immigrants. 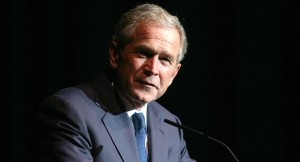 Studies support the above stated fact that the immigrants are influencing the country’s economy in the best way possible. Thus keeping this matter in mind, an immigrant reform policy is very much necessary.

There are many conferences being held regarding the immigrant issue. The issue came into limelight after the Hispanics supported President Barack Obama in the recent elections.

The immigrant issue has been active under the surface for a respectable amount of time. It is becoming a hostile issue, considering the contribution of immigrants in American economy. The reaction of the immigrants cannot be anticipated at the moment regarding this issue.

Under such circumstances, the Bush Institute and Bush himself has advised every individual and political party to be kind and deal with this issue in the best of spirits. He suggested everyone to be welcoming towards the immigrants as they bring many new prospects for the country along with them.

Bush declares that America should be open to all talented people. He says that the new ideas and skills offered by the immigrants can be very beneficial to the country. His perspective in this matter is to bring as much of the best talent of the world as possible and cultivate their intellect in America.

The idea offered by Bush has, however, not been well appreciated by everyone. Rather there have been many protests regarding his policy. The policy was not sanctioned by the Congress. There have been also some individual protestors claiming this policy to be a way for the government to help illegal immigrants reside and prosper in the country.

Statistics, however, speaks for Bush. The GDP growth is significantly influenced by the work of immigrants. The number of patents held is greater for immigrants compared to citizens of America by birth.

Whenever discussing new ways to boost the economy of the country, immigrants have come out as the leading option. Thus to gain the attraction of talents to come to America, a good immigrant reform policy is required. This policy can go a long way in making America a better place in every aspect.

Some quick action regarding this issue is expected. The next year is going to be eventful and may even be fruitful considering the reform put forward by Bush. The policy is either going to be the best move by Bush, or is going to lead to another disappointment.