From Lutes To Gibson Guitars: The Story Of Epiphone

When it comes to household brands, Epiphone is right up there with the likes of Gibson and Fender. With a long history as a musical instrument manufacturer, it was only recently that Epiphone merged with Gibson to create some of the highest quality guitars at an incredibly affordable price. It’s why an Epiphone is commonly in the hands of Canadian guitarists, young and old alike. But many of these Epiphone enthusiasts aren’t aware of the legend behind the name.

Unlike many of the biggest guitar brands, Epiphone got its start in Izmir, Turkey where its founder, Anastasios Stathopoulos, made fiddles and lutes. It wasn’t until 1905 that the “House of Stathopoulo” moved to the States, where it settled in Queens, New York. During this relocation, the company expanded its inventory of lutes and fiddles to include mandolins and quickly became a central supplier of instruments for musiciansall over New York. 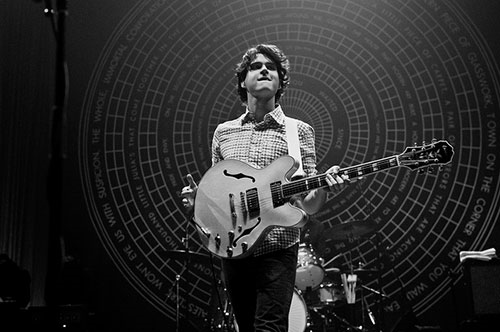 When the company passed hands to Stathopoulos’ son, Epaminondas, the “House of Stathopoulo” took on its eponymous name, Epiphone. As the jazz age of the 20s and 30s evolved into the rock n roll of the 40s and 50s, Epiphone too underwent its own transformation and started manufacturing guitars and banjos.

By 1957, Gibson Guitar Corporation bought out Epiphone, and to this day it remains one of its most popular subsidiaries. Though it maintained its signature line of Archtop guitars, much of Epiphone’s product line is patterned after many famous Gibson models, including the Les Paul, Explorer, and SG. While it mimics the look, feel, and sound of these celebrated electric guitars, they don’t come with its notorious price tag. As a low-priced alternative to these models, Epiphone guitars are routinely chosen for their affordable price points.

Some of the most famous musicians in the world have used – and continue to use – Epiphone guitars. Of the most notable players are The Beatles, who used Casinos to record the album, Revolver. Add to the list Alex Lifeson, Bob Dylan, Josh Homme, Ezra Koenig, and you’ve got proof of its versatility as a brand. With a variety of electric and acoustic guitars available at a number of the music stores Canada has to offer, you can find your very own Epiphone too, which is why it’s a proud part of the best selection of musical instruments in Canada.

Though now over a century since the “House of Stathopoulo” got its start in Turkey, Epiphone remains an excellent source for instruments. Available at a music store Canada trusts for quality, you can easily find the next Epiphone guitar to join your collection. Similar in sound as an expensive Gibson, you don’t have to break the bank to get a well-made guitar.