Washington, Illinois, was just one of the areas affected by a string of tornadoes that hit the area recently. One resident, Steve Bucher, said that he was pretty sure that something was going to happen because of the way the weather was acting. “The sky was just rumbling for 20 minutes,” Bucher said in an interview on CNN. The tornadoes crisscrossed the area, and slammed into dozens of cities and towns in the Midwest. “I told my wife I’ve just never heard anything like this in my life,” Bucher said. The couple finally went down into the basement after Steve Bucher’s wife convinced him that it was necessary. 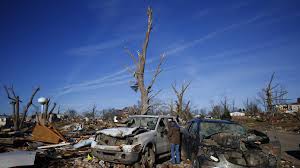 Bucher spoke about his whole experience after they had moved to the basement of their home. He said that within seconds, his entire house was vibrating. He hard glass breaking and things cracking and had furniture flying around. “I think my attitude was in the next minute and a half, we’re either going to be in heaven, we’re going to be in the hospital,” Bucher said. Neither he or his wife were hurt in the storm. This tornado was part of a series of storms that hit several states in the Midwest and caused powerful winds to sweep through the areas. The states that were affected include Indiana, Michigan, Missouri and Wisconsin.

There are six dead from the terrifying storms as of the information available right now in Illinois, and there was also a man killed in Michigan, bringing the total up to seven. There were also a great many injuries, with estimates hovering at around 200 right now. Many of those injuries came from the town of Washington, and some of them were quite serious. The storm also did massive damage, including the destruction of around 400 houses in Washington. In other towns nearby, some damage was also found, especially in Diamond and Coal City. Seven counties in the state were declared to be a disaster area.