Samsung Galaxy Note 5 not yet born, means not yet released and its popularity is touching the sky because of the expectations and news revealed in favour. So, what market analyst think about the Note 5 and its success, let’s discover.

No doubt, in the Samsung Galaxy Note 5, Samsung is going put the modified or better soul that appear in the Galaxy S6 and Galaxy S6 Edge. If especially talk about the S6 Edge, Samsung Galaxy S6 Edge is made on an aluminum chassis, the edge of which is noticeable on the edges of the device. Again, employees argue that the alloy used by “50% stronger than the alloys in other top smartphones.” And the smartphone in any case will pursue. To check this assertion, we did not because they did not want in the event that witness the death of a heart attack in someone from the exhibition staff. On the front, the curved face of the smartphone can see the speaker grille, front camera, the screen itself, as well as a mechanical button “Home”. It is worth noting that when you double-click on it starts the camera – it would seem incredibly simple solution allowed to do without the “extra” keys, and with virtually no loss in comfort. Pressed clearly, with well distinguishable click, but tight enough to prevent accidental presses in your pocket. The other two buttons (“Back” and the call list of applications) are present. And no doubt this adjustment of settings and buttons we are seeing from past 4 generations of Galaxy Note 4, and of course in the case of Galaxy Note 5 everyone would like to see something new. 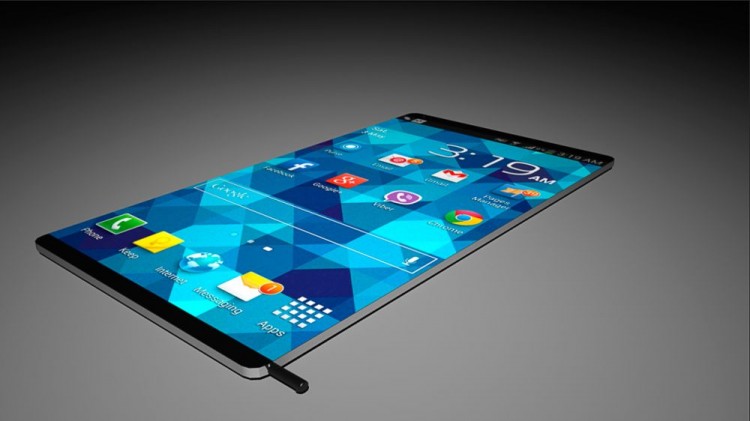 In case of Galaxy S6 Edge, on the rear face is a powerful LED flash, as well as serving decent camera. The latter will inevitably cling to the edge of the pocket and generally for anything, but, in my opinion, the question “Do you want to flash mounted, or a good camera” is left to decide each on his / her own. I suspect Samsung engineers have done everything possible to accommodate an optical system and hiding under the screen cover, try to have as little to do with all the famous hero of Greek myths. And the performance is remarkable. And better sensor would take the Galaxy Note 5 of course ahead.

The right and left faces of Galaxy S6 Edge smartphone made succinctly – one of them is a button on / lock, the second – two volume buttons. Since the sidewall smartphone very thin, and the controls was small and thin – but for their convenience have no complaints. The top of the smartphone is a slot for a SIM-card (opened via clips), you can see the opening of one of the two microphones are used, and infrared. By the way, the last return is becoming a trend, and that is good – it is better to control your TV with the usual smartphone so Infra red sensor is also there. And this all configuration is declaring Galaxy Note 5 a verdict.