A building collapse in South Africa has killed at least two people and authorities are estimating that there are around 40 more trapped in rubble after a building fell down near Durban in the town of Tongaat. Several dozen people were taken to the hospital with injuries, some of them quite serious but there are more still trapped that were not able to be rescued right away. 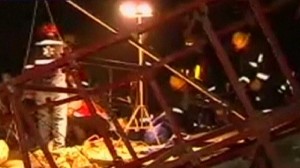 The construction work on the building that fell had been next to a busy shopping mall. Crisis Medical Operations director Neil Powell gave a statement about the incident. “It’s unknown exactly what caused the collapse. There was a large amount of scaffolding and cement foundation that collapsed on to some of the construction workers.”

The rescue operation is beginning but authorities say that it will be very difficult to clear the area and start rescuing people, particularly as it was night when the operations began. We’re waiting at this stage to get to the rubble that is still crushing an estimated 30 to 40 people,” Powell said. The building was around 100 meters in area and it consisted of large concrete slabs, eighteen inches in thickness.

UPDATE: The South African Department of Labor is going to be visiting the site of the building collapse. The total estimated for injuries and casualties are one dead and thirty injured on Wednesday.

Authorities have confirmed that there was one woman who died in the accident and now authorities are apparently concerned about whether or not the proper precautions had been taken in this case. Premier Senzo Mchunu said that an investigation would be carried out as soon as possible. The Department of Labor in South Africa will be sending the acting Director, the current Deputy Director of Inspections and the Commissioner in charge of compensation funds.